“Profit making is the secondary goal of business, the first one has always been the values.” 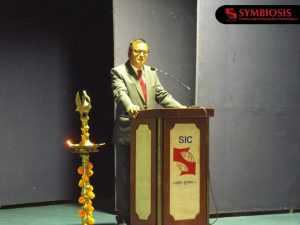 The 3rd “Integrity and Ethics Conference”, 2017 was organized in SCIT on November 11th, 2017. The sole idea of the conference was to make sure that the budding entrepreneurs and Captains here, at SCIT, not only focus on tangible aspects of business, but intangible as well.  The theme of the conference was – “Corporate Sustainability”. As a ritual, the conference was inaugurated by lamp lighting ceremony by the dignitaries and the Director, Dr. Dhanya Pramod. The front row of the auditorium was occupied by veterans – Dr. Rabi Narayan Bastia , Mr. Mohan Nair  – Chairman, EnSigns group, Mrs. Medha Tatpatrikar – Director, Rudra Environmental Solution India and Mr. Prathmesh Raichura – Director, Climate Change and Sustainability, KPMG, India.

The luminaries were welcomed with a beautiful solo performance by Prashant.

This was followed by a speech of the Director, Dr. Pramod. She said that integrity means one should r 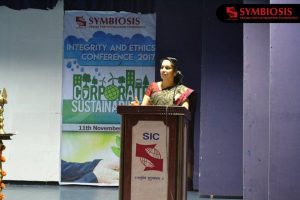 eflect what he says. She intimated the students that the word “Integrity” itself, is derived from the word Integer, which means wholeness.

The Chief Guest of the conference, Dr. Bastia, enlightened the audience with his stirring journey from a normal life to a PADMASHREE awardee, his struggles and his achievements. He discovered KG-D6 field in the year 2002, the largest oil field worldwide till then. He exemplified some remarkable companies which focused on value system from the very beginning. He gave the students many alluring life lessons which talked about conviction, self-belief, perseverance and positive thinking.

To lighten up the mood, there was a rocking performance by the SCIT Band. The crowd sang al

ong with the singers.

Awaiting for the students was another breathtaking initiative by Ms. Medha Tatpatrikar. The students were astonished to know the pathetic condition of Humans and water bodies around the globe due to plastic consumption and disposal. Ms. Tatpatrikar has set up a plant, which converts plastic into a usable fuel which is a mixture of diesel, petrol and gasoline. This fuel can be used as a substitute to kerosene. She is a self motivated individual who has had a very clear vision and worked for it rigorously for years. Today, her organization is contributing immensely to lessen the carbon emissions.

Next in the queue of eminent speakers, was Mr. Nair. He presented some cases like Amul, Patanjali and Chitale Bandhu corporations, which were the creations of common men. These sustained, because they included the bottom of the pyramid, the farmers and villagers, and also these corporations never compromised with their values. The students were urged to rethink about how we, as Indians, are inculcated with a precious value 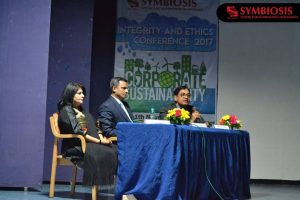 system. He insisted that, in this era of money making and fierce competition, keep one’s values intact, as they are precious. He left a mark on students by giving them 4 reasons for taking birth – Live, Learn, Love, Leave a legacy.

The final speech was by Mr. Raichura. He shared his valuable thoughts on defining sustainability from economic, social and environmental perspective. He added that valuation of companies is based on intangible assets rather than tangible. The students were, obviously, full of doubts and questions. There was a gripping Q&A round at the end. The ‘Integrity and Ethics Conference’ culminated with Vote of Thanks by Prof. Shaji Joseph. SCIT-ians look forward for more such initiatives which make the students realize the worth of values and Integrity.