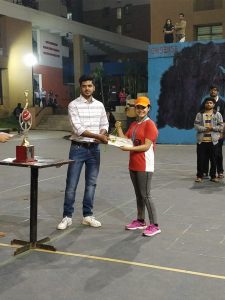 The customary and legendary Female Cricket League 2.0 was back with a bang. FCL kicked off in SCIT on 20th November this year. Students were all teamed up for the same. Let’s get introduced with the vibrant teams of this year – The Mumbai Indians, Chennai Super Kings and the Gujrat Lions. Massive crowd surrounded the sports arena every evening to witness the victories of the sportswomen. The matches were no less than the boys’ cricket matches. The ladies were nowhere lagging behind in striking sixes and fours. The crowd cheered up the players in the loudest of their voices. There were one on ones between the teams following which there were semifinals between Mumbai Indian and Chennai Super Kings. CSK became the 1st team to reserve its spot in the finals. DDD emerged as the 2nd team to join, or rather, to battle against CSK. The boiling battle for the Golden Cup was scheduled on 26th November . The amazing crowd was, as expected, present in the sports arena before time, all set to scream and shout out for their teams. After an intense match, it was the Delhi Dare Devils 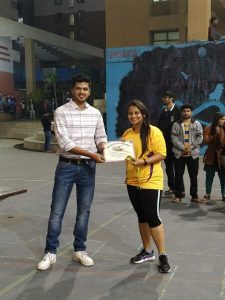 . They won the cup by setting a benchmark with 3 overs remaining. The league went on for a week. Special prizes were distributed to the players. The emerging player award for FCL’17 went to Anuja khambeker. Geetika Pant won the orange cap for securing maximum number of runs in the tournament. The purple cap was bagged by Nupur Khune, for the most number of wickets in the tournament.  SCIT boasts its female players this year too. The League culminated with many budding players to be seen on the field next year as well.