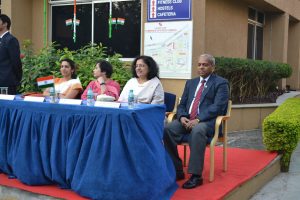 26 January 201 8, marked the republic day celebrations at the SIC Hinjewadi campus. The event witnessed a fair turnout of students and guests despite the chilly weather. The event was graced by the Directors of all the three colleges of SIC. The event began with flag hoisting and National Anthem, post which, the Director of SCIT, Dr. Dhanya Pramod opened the event. Dr. Dhanya, spoke about how it is important to be patriotic not just during the special days like this but be proud and patriotic throughout the year. She also said that India has grown leaps and bounds in all areas of development and it is the youth of today who should take part actively in helping the country to grow ahead. She also threw light on various tasks to be undertaken by the present students who are the future citizens of the country. After this the campus administrator Col. Kadam gave a speech on ‘Positivity’ and urged the students to see positivity in everything in life. After this there was a patriotic song sung by the SCIT band ‘Konnect’ which filled the atmosphere around the campus with the feeling of patriotism amongst all and enthralled the audience. The next performance was by the SCIT dance group ‘Symbeats’ who also danced to the beats 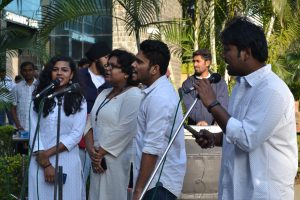 of Patriotic songs. The colorful performance by the dance group revived the patriotism in all. Later there was prize and incentive distribution to all the non-teaching staff who have helped keep the reputation of campus as safe and secure as it is. The event concluded with the release of tri-color balloons into the air which was a sight not to be missed.