Parallel Universe to a Layman

Parallel universe and theories surrounding it have always been puzzling scientists. The concept of vastness of universe, theories of its origin and what  might lead to its crunch have been the hottest topics of discussions since Einstein’s era. Students of science like myself, and i am pretty sure many others too, have found it difficult to understand these theories. Let us make an attempt to get a feel of the same.
Lets walk through the corridors of universes keeping ourselves as far was possible from the perplexing formulas and terms. An analogy and very close to the exact theory of Parallel Universe, recall the day 12th august 2005. Well, to most of us, it was a normal day hence no profound memories are retrieved ! Suppose you woke up that day at 8 am. What would have happened, if instead of 8, it was 9 am?
You would have for sure triggered a whole new set of events, that other wise did not happen. Hard to gulp, how difference of an hour can set you in another universe. Lets take another example.
You and your dog, mmm, Tommy (yes ! a very unique name, lol  ) are out for a walk. All of a sudden, you loose hold of Tommy, he runs behind a saucy bitch. In an effort to catch Tommy, who is running at full momentum and with romantic intentions, you slipped and hurt your back. Now, lets rewind. What would be the current situation. if your hold on Tommy’s belt was tight. All of this chaos would have been avoided, and you would have escaped an injury. 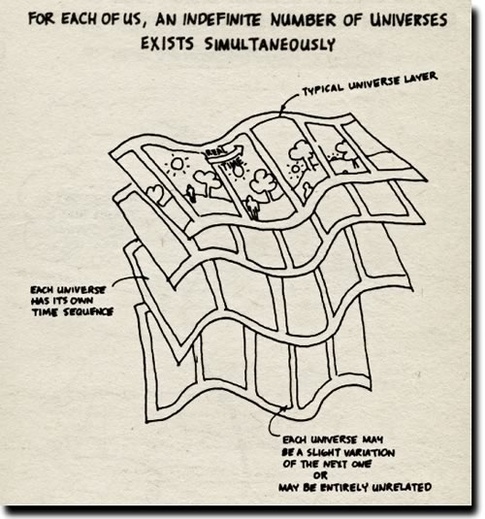 A slight change, triggers a whole new set of events. In the earlier example, we took the time quantum to be an hour. It could be made as small. To the smallest unit of time one can imagine of. This would date back to the time you were born. Life, scientifically is a series of events that occurs during different intervals of time.
Our present life, is a result of each action that we have taken since the day we were born. An inspirational movie, a  fluke that later came out to be correct, instinct and gut feeling, all of these have at some point in time changed the course of our lives and  made us stand to where we are. You can imagine, if a
decision taken at t=0 decided your situation at t=1 (where t1-t0 represent the smallest unit of time one can think of), there shall be infinite instances from your time of birth that has started a new chain of events in some parallel universe, that consists of you, your people, surroundings pretty much similar, with the only difference that has appeared due to different choice selection.
For example, consider the Empire State Building, it may be standing tall in some other parallel universe, as they might have adopted a better way to fight terrorism. Or some other universe may be much more technically advanced, and an equal probability that some may still be lagging. These are just some loose examples to make you feel what we mean by Parallel universe.

The number of such Parallel Universes is infinite. Nobody knows where they exists. Some say it is impossible to contain infinite parallel universes. as the collision between their boundaries would cause immense energies to get exchanged. Others say, people can travel between universes and see a version of themselves. They can communicate with happenings in one universe while being in other parallel universe, Deja Vu is an example.
I am still amazed, at the vastness of the universe.