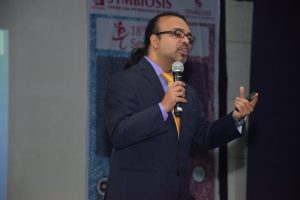 SCIT organized its 18th National Seminar on “Beyond the R^2: Analytics, an Altruist to Information Security or rather an Antagonist” on 16th September, 2017. This seminar aims to bring together the best of globally renowned research professionals and explore the interface between the industry and real time environment.

The chief guest for the seminar was Mr.Tuhin Chattopadhyay who is an Associate Director Advance Analytics Consulting at Nielsen. He is an eminent business analytics and data science thought leader and also a distinguished member of American Statistical Association and Association for Computing Machinery.

The seminar started off with lighting of lamp by Dr. Dhanya Pramod and the chief guest. Dr. Dhanya Pramod through her speech encouraged students to get into the research field and contribute towards the growth of the country. Mr. Tuhin Chattopadhyay was then invited over to talk on how to make a mark in the field of Data Science. He spoke on how to become an ethical Data Scientist. He pointed out that in order to be a good data scientist, one should be a good human being first because it develops a piece of mind and this leads towards a happy and successful personal and professional life. He also spoke about “Eight Pillars of being a good human being” which include self-awareness, integrity, couragensness, non-discrimination, education and common sense, emotional quotient, respect other’s privacy, altruism. He ended his speech with a question and answer round.

After this a panel discussion was held in which many eminent industry leaders had joined. The panelist were Dr. Ambica Rajagopal who is a Data Scientist at Cummins Inc, Mr. Amey Pathak who is Deputy General Manager at Analytics – Tata Insights and Quants Division , Mr. Anup Nair who is IT System Assurance  & Advisory at RSM India, Mr. Rajesh Hariharan who is a Cyber Security Manager at NSE. The moderator for the event was Mr. Baijnath Pandey who is a Marketing Specialist at L&T Technology Services.

The panel discussion was about the how data is getting generated and growing at an unprecedented rate. Till last year there was about 2.7 zeta bytes of data generated and by 2025 there will be 180 zeta bytes volume of data and how it is difficult to maintain the security of the data in today’s world. Bigger the data, more complex are the information security systems and where there is complexity, there is a chance of threat and vulnerability for the data. Hence there needs to be a stringent legal framework implemented for the same.

There is a need to have a robust solution in place to circumvent the cyber security attacks. By just investing in tools and technology won’t be sufficient hence there is a need to train the people and processes regarding the same. There was also a discussion regarding how hackers of today use artificial intelligence to mimic the authenticated behaviors of the systems. This can be countered only with the use of AI. They also discussed the data and security issues in retail and cards and payments industry.

There was a question and answer round at the end of the panel discussion in which the students interacted with the panelists and which also helped them clear a lot of myths regarding the data science industry domain. The event ended with a vote of thanks from Deputy Director of SCIT Dr. Kanchan Patil who praised the speakers, organizing committee and the participating students for making the national seminar a huge success.