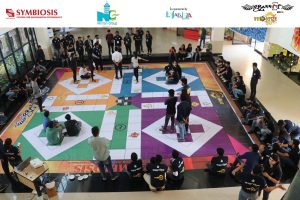 The countdown finally ended! The most awaiting event of the year, Graffiti ’18 marked its presence in SIC. It has been a tradition here, at SCIT, to celebrate Graffiti as our own festival and dedicate ourselves to the fullest for making it mightier, every other time. The theme for this year was Innovenze, which is a combination of two words – Innovation and Convergence. The 2-day event was packed with fascinating competitions, gripping celebrity performances and obviously, the food joints among may other amazing stalls.

Graffiti was inaugurated on 19th of January, with a soothing acoustic night, which was followed by a cake cutting ceremony. The flash mob was an icing on the cake. The morning of 20th January witnessed the grand opening ceremony by our title sponsors – Nirman Group, Co-Sponsors – Lollapalooza and Airtel, Direct 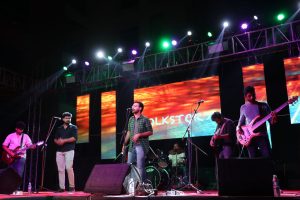 or, faculty coordinators and the student Main Coordinators. The spirit and charm of Graffiti ’18 was felt everywhere on the campus. All thanks to the dexterous Graffiti team. There were long queues of participants at the registration desks.

us, Bizolution and LAN Wars. All these events were one of their kind and they tested the participants thoroughly for their techo-manegerial skills. The tiring and fulfilling day had more in its store. The evening was ornated with the scintillating performance by the band, ‘The 5th Veda’ and DJ Eclair. The campus throbbed with the

beats of music and danced along.

The second day had a lot more for the participants. The events lined up were, the flagship event – Advitiya, AuctionKart, Stenfo 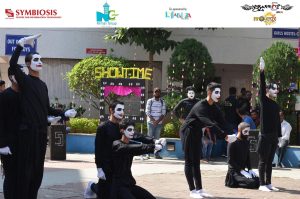 ria, Trade knock and Quizinatia, along with the second day of Nautanki Shaala and LAN Wars. The participants were delighted to be a part of Graffiti. The tremendous energy and excitement from the participants made the event a huge success. The batch of 17-19 managed the events gracefully. The prize distribution ceremony was made special by the presence of participants, Ms. Savitha Nair, Prof. Mugdha S Kulkarni and Prof. SVK Bharathi. The event concluded with the vote of thanks by Prof. Mugdha and the Main Coordinators.

A musical evening awaited the students on the second day as well. SCIT’s pride, the college band rocked the stage. The stage also witnessed the naming ceremony of the band, as ‘Konnect’! Following Konnect, the band ‘Folk Story’ captivated the audience with their amazing performance. The band took away hearts of many by humming the favorite tunes of the audience. The crowd was tranquillized with the soothing performance of the band. Despite being exhausted by the long 2-day efforts, the students grooved tirelessly to the tracks of DJ Spinz Brothers.

The student-driven culture in SCIT has always focused on holistic improvement of individuals. An invalu 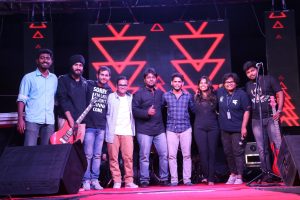 able experience is earned when the students work day in and day out for something of this magnitude, unanimously to witness its success. Nothing else, but Graffiti, could have taught this. Kudos to team Graffiti!! May Graffiti live long and prosper.