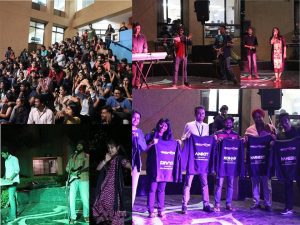 Every year SCIT organizes its flagship techno-managerial event called Graffiti. SCIT officially launched the theme for Graffiti 2018 on 22nd December, 2017. The theme of Graffiti ’18 is “Innovenze – When ideas turn into actions”! Graffiti ’18 is scheduled on 20th and 21st January, 2018. The theme launch was a special occasion for students to celebrate. The event started with an energetic performance by ‘Symbeats’, the dance group of SCIT. They enthralled everyone with their foot-tapping music! After the performance of ‘Symbeats’, SCIT Senior and Junior Band took over the stage and entertained the crowd with their melodious voices, including popular Bollywood numbers, international hits and even a beautiful self-composed song. It was a great pleasure to watch the whole performance live. Excellent impromptu games, mimicry and solo dance performances by students mesmerized the audience. The spectacular evening of theme launch came to an end with an amazing DJ night!