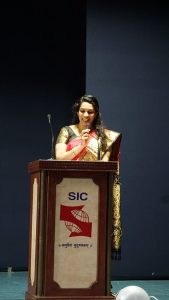 August 3rd, 2019 was a special day for the entire SCIT family. Dr. S B Mujumdar, Chancellor and Founder of SCIT, Professor Shaila Kagal, former Director of SCIT, Mr. Arun Melkote, Vice President of Wipro Technologies, alumni, faculty and students had all come together to the SIC Auditorium to celebrate the Foundation Day and 20th Grand Alumni Meet. The event started by lighting the auspicio

us lamp of knowledge.

Dr. Dhanya Pramod, Director of SCIT welcomed the gathering and spoke about the changes that the institute has gone through since it started in 1999. She thanked the former Director for her contribution. She enlightened the gathering about the MBA – Data Sciences and Data Analytics course which started two years ago and received a ranking in the Analytics magazine. She went on to thank the alumni for gracing the occasion with their presence and spoke to them about the importance of coming back to their alma mater. 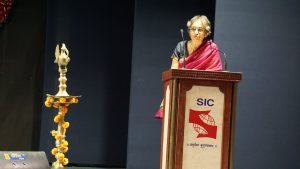 wn the memory lane. She thanked Dr. Mujumdar for guiding her to a fulfilling professional career. She said that the college had started with three faculties and was housed within the SITM campus initially. Later, through the continuous efforts of Dr. Mujumdar and Dr. Vidya Yerevdekar, the college got shifted to the SIC campus at Hinjewadi. She spoke at length about the difficulties that the management had to go through to obtain NAAC accreditation and how th

ey had understood the need for setting up

Proof of Concept lab in the early 2000s itself.  She congratulated the faculty and support staff for their untiring efforts towards making the students industry ready when they graduate.

Later, Dr. Mujumdar took to the stage and spoke about the emotional bond that Professor Kagal and he shared with the institute. He said that “An institution which does not change with the changes happening in the outside world cannot prosper”. He also mentioned that SCIT has stood out for always keeping up with the pace of all changes. He took references from one of Tony Blair’s interviews and sa 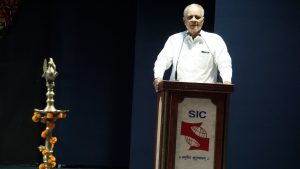 id that education will always be given utmost importance. He quoted that “Education is the oxygen for development”. He also went on to say that it is easy to plant the seeds of an institute but difficult to sow modern thoughts into the syllabus in order to make sure that the right education is imparted to all. He thanked the Alumni for being the intangible wealth of the institute and asked them to continue to visit their alma mater as frequently as possible.

Mr. Arun Melkote, Chief Guest for the event addressed the gathering and congratulated the dignitaries for their relentless efforts and contributions towards making the institute a premier IT B-school in the country. He said that quality education for all is a right and it is knowledge economy which is driving our country forward.  He congratulated the management for introducing the Data Sciences and Data Analytics course and also went on to say that the next few years will be important for SCIT as an institute as it will have to recognise the changes around the world and adapt to the same. He also said that the only infinite resource in today’s world is our thoughts and urged everyone to think in a futuristic manner to bring about more development in our country.

The official trailer of Foundation Day and Grand Alumni Meet 2019 was played soon after the speeches by the various dignitaries. The video captured various moments from 1999 to 2019 and stood as a testimony to how much the institute has developed since its inception in 1999.

Dr. Kanchan Patil, Deputy Director of SCIT delivered the formal Vote of Thanks for the event.

She thanked the dignitaries for taking the time off their schedule and making it to the event and enlightening everyone with their speeches. She also thanked the Alumni for making it to the celebration. She went on to thank the faculty, support staff, Alumni Relations team and students for contributing to the success of the event.

The celebrations continued post lunch and began with a speech by Mr. Simerjeet Singh, a renowned motivational speaker. He spoke to the audience about the need to have a fresh perspective in order to reach great heights. He also went on to say that fresh actions will be the steering wheel behind achieving the same. He said that life is too short to make all mistakes ourselves and thus we all must make it a point to learn from those around 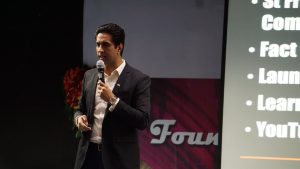 Symbeats, the dance club of SCIT captivated the audience with their powerful performances. Eklavya, the theatre club took to the stage and enacted a skit on the Life at SCIT. They enacted experiences that every student goes through during their two years in the college. The final performance for the day w

as by Konnect – the official band of SCIT. The enthralling performance by the band gave a fitting ending to the Foundation Day and Grand Alumni Meet 2019.

The untiring efforts of the Alumni Relations team along with the support and encouragement from the management made the event a memorable one which will forever be etched in the hearts of everyone. My Escape Route is beautiful… SCIT : We start with trekking