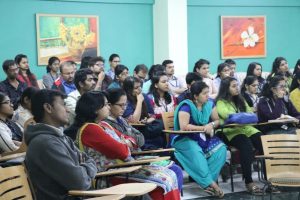 ISR committee of SCIT, once again, did a splendid job by organizing another enlightening guest lecture. The lecture was scheduled on 10th January, 2018. The esteemed guest for the day was Mr. Vinay Shetty, Former Vice President, Think Foundation. Mr Shetty is a dedicated individual whose mission is to give back to the society. He conveyed to the students that around 1 lack children in India are Thalassemia major. He explicated the ignorance of people towards this sensitive issue by narrating a short story of two individuals, who were thalassemia minor. He informed the audience that the thalassemia minor people are absolutely healthy, but they can give birth to a thalassemia major baby. There were two major takeaways from the story, every youngster must do a test for thalassemia and every individual should get his/her partner tested for the same.

He also informed the audience that about 50 million people in the globe are Thalassemia minor. Immersing into the issue, Mr. Shetty told the students that thalassemia major is a genetic blood disorder. A thalassemic patient needs blood in every 15 days.  He told the students that thalassemia occurs due to lesser production of globin (protein) in hemoglobin. In the second part of the guest lecture, Mr. Shetty focused on the urgency for blood donation. The audience was surprised to know the fact that about 20ml/kg of blood is stored as a buffer in a human body. So if someone weighs 50kgs, there is 1000ml of blood stored as buffer at any point of time in that body. Along with this, a healthy individual can donate once in every 3 months. Following his speech, there were a lot of doubts and queries among audience which were cleared by Mr. Shetty. The lecture culminated when Deputy Director offered a token of appreciation to Mr. Vinay Shetty.