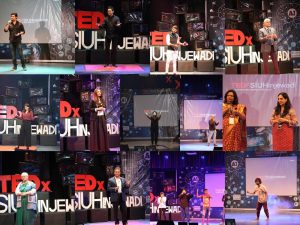 y SCIT in collaboration with SIIB. The event was made special by the presence of a wide range of eminent speakers and talented performances. The speakers included K Naga Sravan, Lalitha Kumaramangalam, Aditi Chadha, Sumit Ganguli, Manish Advani, Satarupa Pyne and Nakul Shenoy. The day was filled with inspiring stories and experiences shared by the speakers. The performances included dance by Saddam Shaikh, beatboxing by Jesus Mehta, stand-up comedy by Akash Singh & Sahil Horane and Abstract AD, the band!

The official teaser of TEDxSIUHinjewadi raised the curtains for the event. Technology, Entertainment and Design comes together for an amazing experience at every TEDx event. Eklavya, the mavericks of theatre, began the show with a thought-provoking Mime about the power of communication and the thoughts spoken out. K Naga Sravan, the first speaker of the day, talked about the rat race of this generation. He shared his experience on how he managed to take a different path in life. Naga Sravan believes that ‘All you need to do is to make people think’. His efforts are focused towards engaging youth in politics and a better future for the country.

Lalitha Kumaramangalam, the next speaker, shared the story of her life. She talked about her personal life and the experiences that changed her life. She inspired the audience by stating, “What makes you a success, is coming to terms with failure, and putting it behind you.” Lalitha Kumaramangalam concluded her amazing talk by urging the audience to trust themselves more than anything else. She added, “Don’t doubt yourselves and trust your instincts.”

Soon after, Saddam Shaikh and team portrayed a mind-blowing dance performance. The quick movements and the subtle emotions enthralled the audience! Aditi Chadha, the next speaker talked about her unique idea of DAZL. She shared her journey of becoming a successful entrepreneur. Her spirited words about entrepreneurship and new initiatives motivated the crowd. Next up on the stage was Jesus Mehta and his team, who made the event more exciting with their awesome Beatboxing performance. The audience were left awestruck by their show!

The second half of the day at TEDxSIUHinjewadi commenced with a talk by Sumit Ganguli. He began the session, talking about ‘Inflection Points’. He reminisced the inflection points of his life – the little moments of impact that change lives. Sumit Ganguli concluded his moving speech with a note of optimism, where the world would be more sensitive to inflection points. He urged the audience towards disruptive thinking. He said “Accept things you cannot change & have the courage to make some changes”.

Manish Advani, the next speaker, spoke about his personal experiences. He stressed that our lives are all a mix of ups and downs, but one must never give up. Manish Advani talked about the RAGA of life – Refresh, Attitude, Guru and Activities. He said that the simple mantra of RAGA, can save one from the VUCA (Volatility, Uncertainty, Complexity, Ambiguity) of life. The show took a new course as the stand-up comedians took over the stage. Akash Singh left the audience in a laughter spree with his amazing charm! With Sahil Horane up on the stage, the audience was absolutely entertained by his impromptu jokes. Stand-up comedy totally engrossed the audience at TEDxSIUHinjewadi 2018.

The next speaker at TEDxSIUHinjewadi 2018, Satarupa Pyne, shared the story of her life, and her transition from a tom-boyish sportsperson to a successful model-turned actress! Satarupa Pyne concluded her words with a message to the audience, “Don’t be too comfortable with your situations. Choose to be uncomfortable, and don’t be afraid to change!” The event continued with ‘Magic through the ages!’, as Nakul Shenoy discussed the history of Magic and Magicians. ‘Magic has survived 5000 years, and will survive another 5000 years’, he remarked. Nakul Shenoy left the audience spellbound with his unbelievable magic, along with Sumit Ganguli.

Prof. Apoorva Kulkarni, from SCIT and Dr. Suchita Jha, from SIIB proposed the vote of thanks for the event. The TEDxSIUHinjewadi team thanked the audience and the esteemed speakers of the day, for making the event a grand success. To mark the end of an amazing experience, Abstract AD, the band, seized the stage, at TEDxSIUHinjewadi! The band got the audience grooving to their amazing fusion and retro beats!