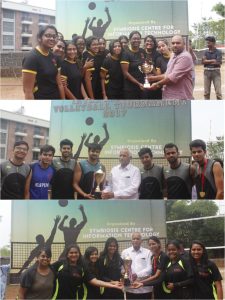 The Inter Institute Volley Ball Championship was organised by Symbiosis Centre for Information Technology, in association with University Sports Board at Sports Complex, SIU, Lavale Hill Top Campus, on 4th October to 6th October, 2017. The tournament saw very exciting competition for all three days. The organising committee from SCIT also did a great job for the entire duration of the tournament.

First day had the initial rounds and quarter finals, across 14 matches. Second day saw some quarter final matches, as well as the semi-finals, in about 8 rounds of games. On the third day of the Championship, special dignitaries were invited to grace the occasion and felicitate the winners. The chief guests for the event were Mr. Devidas Jhadhav, Ms. Vaishali Phadtare, Mr. Aejaz Sheikh and Dr. Nayana Nimkar, Director, University Sports Board.

Below are the final results of the match.

It is indeed a proud moment for SCIT as our Volleyball Boys Team won the second position in the Inter Institute Volleyball Championship! Kudos to the team for their fantastic performance!