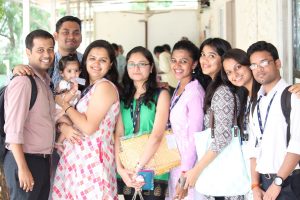 The ISR committee students along with the volunteers visited ‘Navkshitij’ on 14th August, 2017. ‘Navkshitij’ is an organization founded by Dr. Neelima Desai whose aim is to create a place where, mentally challenged kids as well as adults are taught life skills and vocational skills so as to make them independent and also nurture them with compassion.

Navkshitij is located at a village called Marunji near Hinjewadi, Pune. The organization houses 61 residential special friends who are adults and they also have a day care center for 30 kids who are aged between 6 to 12 years.

The ISR volunteers were told about the daily activities are conducted at the organization and they were also shown around the campus.  The children did few dance performances for the ISR volunteers and also made the volunteers join them in the dance.

The special friends have learnt to make paper bags, lanterns, jewelries, chocolates etc. They then sell these items which is like an income to them and it instills a sense of independence amongst them. For the upcoming Ganesh Chaturthi festival they are coloring the Ganesh idols and for the Diwali festival they are painting diya’s which will then be sold to rotary clubs and other similar clubs. The volunteers encountered many talented kids and adults who performed and interacted with them.

There is discipline maintained in the campus. A unique mode of punishment is given in which if the special friend is angry or disobeying then they are made to jump on a trampoline in order to release out anger and frustration inside them.

The cooking of food is also done by themselves by using solar cooker and they also do the cleaning around the campus whichever interests them. All of these activities are conducted in the presence of a coordinator who monitors and teaches them.

Their daily routine includes that, during the day time they attend school. The curriculum is such that it recognizes and respects their innate skills and abilities. After the daily classes they are taken outside on the campus to perform small outdoor activities.  Side by side they are also taught the vocational activities and crafts which acts as a source of income for them. Along with this all of them are given monthly Rs. 100/- which is considered as a salary to them. With this accumulated salary the special friends are taken to mall for shopping every month so that they can buy whatever they need.

The facilities provided at the campus include gym, physiotherapy center, dance classes, yoga classes which are done in the alternate days of the week. Every year the entire campus goes on a trek to Himalayas. They also participate in zorbing, paragliding and rappelling, and go on vacation to fascinating local and overseas destinations.

Along with this they also go for various dance competitions with other similar organizations and they have won multiple prizes for the same. Navkshitij is also planning to open another center in Pune itself.

The ISR committee donated weighing machines, LED bulbs and door mats for the campus. The visit was an enriching and learning experience for volunteers and made them more sensitive towards special friends. Beginning of a New Life at SCIT