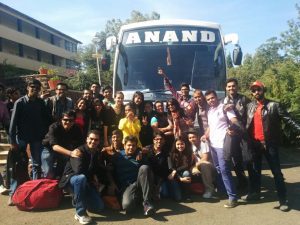 Change occurs when someone begins with himself/herself.
The Moral Re-Armament (MRA) Camp at Panchgani organized in the last week of November was certainly one of the best experiences I have had, of my time at SCIT.It was a chilled Monday morning when a group of SCIT students, started our journey of four days to Panchgani, not knowing what was in store for us. I personally felt excited as this was one activity which broke the mundane routine of college, lectures, and studies, as also it was taking me close to nature which I am so fond of.

We reached the Asia Plateau camp (as the Panchgani centre is called) around noon, and the first thing I noticed was a group of young people , out of which surprisingly only  one was Indian , were waiting to welcome us. Very graciously they guided us to our hostels . After a light brunch we all assembled in the Auditorium, where we were got the first glimpse of IoFC(Initiatives of Change) .The volunteers/speakers talked about  the Human Factor ,which IoFC stresses to bring change in individuals and the society.

We were then divided into groups (or very aptly called, families!!) and taken for a tour of the whole campus. There were various rooms and areas, each having a different purpose and name, relating to the people or countries who had contributed in building the IoFC centre. In the evening we were taken for a small trek to the Table Top Mountain, which tested the endurance of many, but the view at the top made it worth putting in the effort. It made us all come close to Nature. One of the volunteers very aptly said that we all are part of Nature, we just need to take out some time to rekindle our connect with Nature.

The next three days were filled with very enriching and insightful activities.

Starting with the Quiet Time in the morning, which provided the opportunity to introspect in the midst beautiful surroundings. The Family Get-Togethers, where every member was encouraged to share his/her problems or anxieties. It was one the best sessions we had at the MRA camp. The Dish cleaning sessions, wherein each family had to take part in the cleaning of dishes of the entire group,
(and had to keep singing while doing so ..!!) . It brought a sense of camaraderie in the family group and taught us  the value of service . Then there was a visit to a village nearby called the GramPari, where we got to know how IoFC was helping and training the rural people, to sustain themselves and live a life of dignity and happiness. We had a session called Expressions, where we had to show our talent. To everyone’s surprise there were some students who had never performed on stage, they too gathered courage and came to the stage to sing/perform. It was one session where everyone enjoyed a lot. The Appreciation workshop taught us the power that appreciation has, and how it brings happiness to not only the one who receives it, but also to the one who gives it. The Power of vision taught us the value of finding the meaning of life and how to consistently work towards achieving it.

On the last day we had two important sessions, one was called Reflections wherein everyone had to speak on their life and experience at the MRA Camp. I saw a mix of courage and conviction in almost all my friends there (as if it was we were listening to some of the best life-coaches sharing their experiences).The last session was on the two big insights from my time here and what am I going to do differently from now on . This session too brought out a number of diverse thoughts, each one of which was no less inspiring.

To conclude I must say that the four days at the Asia Plateau were truly amazing. The ever enthusiastic group of volunteers and mentors who motivated us in every activity, the very delicious food that was served to us (I actually went inside the cooking area and congratulated the people cooking, the smile on their faces was priceless) and the beautiful and serene surroundings around the camp .It was an experience that made me connect closely with many of my friends and more importantly with myself.

As they say all good things do come to an end, but the learning and experience I got from this trip will remain with me for my lifetime.

I congratulate SCIT for organizing such initiatives, and hope this continues in the future. What is the relevant punishment for rapists