I was planning my visit to Japan so as to explore the possibilities for initiating Memorandum of Understanding (MoU) with Universities in Japan.The motive was to enable student exchange, faculty exchange and collaborative research. I was trying to connect with some one in Japan through my online network. Ms.Savitha Nair (placement officer) SCIT extended her support to me by giving the contact of Mr. Nitin Gupta, a 2001 pass out from SCIT. Mr. Nitin Gupta, works for c-sam (http://www.c-sam.com) a company found by Sam Pitroda, at Tokyo-Japan. Nitin helped me finding a place to stay in Tokyo.

Today, I had an opportunity to meet Nitin at Tokyo (Japan) in the evening and we went together for a dinner at Dhaba India an “Indian restaurant” in Tokyo.  We were discussing about the culture of Japan, the people in Japan and a lot of things that we have to learn (especially the humility, self discipline and time management) from themwhich they inbibe in them as a way of life.  During the course of our discussion we got into the topic related to guest lectures at SCIT. I then requested Nitin to deliver a  guest lecture to students at SCIT on video conferencing mode. He readily agreed for the same! His GL will be a great value add to all the students at SCIT, as he would share his experience of being the global delivery head.

Nitin was sharing about his experience of landing in Japan in 2001.He was invited by a company in Japan, which was very much impressed with his knowledge and ability in the area of “IT Infrastructure Management”. The company was so impressed that they hired him, in spite of the fact that he did not know “Japanese language” during that point of time ! Today, Nitin speaks Japanese fluently. I saw him speaking very fluent Japanese with the waiter at the restaurant! I was also surprised to know that Nitin could read, write, and speak Japanese language.He learn it, during his lunch break in his office! Japanese language is written with a combination of three scripts: Chinese characters called kanji and two syllabic (or moraic) scripts made of modified Chinese characters, hiragana and katakana.  After all he is an SCIT alumnus and we prepare our students for complex environment and this is a proof of concept in a different domain! 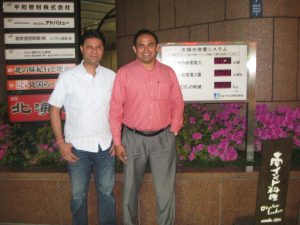 Nitin was sharing his views on the curriculum, and felt that a foreign language must be introduced as an NLC( Non Leter Credit) for the students. I promised him to do it from 2013 batch and for the 2012 batch of MBA(ITBM) students this will be done based on their voluntary interest. We spent just an hour  and he was recalling all his memories at SCIT. I was very happy to know that he wished to collaborate and contribute to the institution in every possible way, as he felt that SCIT was the institution which had certainly contributed for what he is today.

Today it is reinforced that east or west SCIT alumni around the globe are the best!