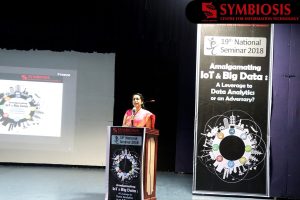 Symbiosis Centre for Information Technology hosted its 19th National Seminar on 15th September, 2018. The topic of discussion was “Amalgamating IoT and Big Data: A Leverage to Data Analytics or an Adversary?” Students and faculty members gathered together in the SIC Auditorium to hear from some of the eminent leaders in the industry. The Chief Guest for the Seminar was Mr. Sameer Dhanrajani; Chief Strategy Officer at Fractal Analytics.

Dr. Dhanya Pramod, Director of SCIT, addressed the gathering after the traditional lamp lighting ceremony and gave insights on what to expect from the seminar. Mr. Dhanrajani took to the stage and spoke about the Industrial Revolution 4.0 and how Artificial Intelligence is playing an important role in our lives today. He spoke at length about the journey from Descriptive Analytics to Prescriptive Analytics. He did a comparative analysis of the sustenance of organisations in the Fortune 500 bracket and said how the average life of an organisation had come down to 12 years to 35 years. He urged the students to make the world human first and not AI first. He also asked the students to challenge the status quo and embrace new technologies as they come.

The panellists then took to the stage to discuss on the role played by IoT and Big Data. The moderator; Mr. Gokul Alex, Associate Director at PwC introduced the audience to the topic of discussion. Mr. Sourabh Mukherjee, VP, Data Management Capability Lead and Solutioning Lead, IDAG at Accenture spoke about the affordability of data and how it is posing challenges to the organisations. He also said that AI has become the new UI and emphasized that data veracity and data leveraging are two major issues that industries are facing today.

Dr. Sheela Siddappa, Global Head, Data Analytics, Bosch; used anecdotes from her time at Bosch to discuss the growth of Operational Data; both in terms of quantity and diversity. She also spoke about the multidimensional integration of IoT with Big data analytics. Dr. Pradeep Bilurkar, VP, Machine Learning, Barclays shared his views on the progression of Robotics Process Automation in blending consumption of huge data with IoT. He emphasized that it is necessary to understand the basics of any technology in order to master the same.

Mr. Kapil Gandhi, Associate Director, Ernst & Young, spoke about the need to convert unstructured data to structured data in order to put it to proper use. He also emphasized the ne

ed to inculcate story-building skills in order to move up the corporate ladder.

At the end of the panel discussion, the students participated in an active Q&A session with the panellists. Interesting and thought-provoking questions on the importance of IoT and Big Data were raised by the students which was well appreciated and answered by the esteemed dignitaries on the stage.

Dr. Kanchan Patil, Deputy Director of SCIT thanked the Chief Guest, Dignitaries, students and faculty members for their active participation in the 19th National Seminar 2018 and making it a huge success.